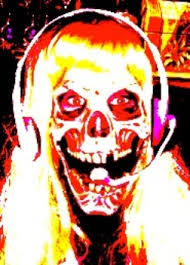 If I could live forever, I still doubt if the cellphone company's admin issue with me would ever be resolved.

Their Call Centre is a Kafkaesque trial in a leaking submarine, trapped in a dank cave with a rising tide.

" It's paranormal!" I respond.

Scratching for air and light, I query if I'm possibly part of a Monty Python sketch.

"I'm sorry sir, once it's pre legal, the system won't allow me in to tell you what it's for."

"So A.I. now replicates floundering human incompetence in a symbiotic, upended purgatorial slinky spiral, whirring through Westron echoes down into Middle Earths bowels to eternal damnation and suffering!" I offer, starting to express myself clearer.

" Fraid so sir...unless you pay the outstanding amount."

Posted by Deon Bing at Monday, October 29, 2018 No comments:
Email ThisBlogThis!Share to TwitterShare to FacebookShare to Pinterest

It's quiet in Imlil 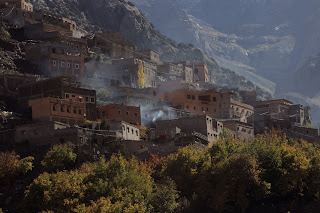 Uncertainty excites me but the recent thrill of the Tiz n Test drive is forgotten in this village, where routine is reassuring. I'll get complacent and never leave.
So I look at this non challenge as a new challenge.
The early call to prayer is comforting. Echoes through the crisp valley encourage others to join. Committed people out there in the darkness, getting ready for the day. I'm in Imlil, a trekking base for the hike up Toubkal, high in the bare Atlas.
The balcony door's been open all night, staying wide from us staring at the Milky way, counting shooting stars, linking sentences with five minute pauses.
Silent spaces for effect.
The mosques tin speaker crackles off and its quiet again. I'm awake, listening for clues of the day.
A crunch of gravel, more a shifting donkey than anyone with intent. It's the only sound they make, or a resigned snort under load. I can't work them out, as indifferent to affection as to poorly loaded gas bottles, or side saddle city girls on the climb to the kasbah. I hope they're happy.
A river rock rolls under the flow of the last melt from the surrounding peaks. Locals say it'll be another two weeks before the snow's back.
Cocks crow at just the right volume. The village is waking up, like it always wakes up. Nothing changes up here. A dog barks, settling quickly, more of a good morning test than a threat. Lucky the biker that lives at the top of the hill,  freewheeling acceleration gets him started on a cold morning. Speeding up, it grabs fuel and fires the engine for work below. Far down, a truck under heavy load finds the ideal gear, sticking with it on its way up. Hope he misses the bike rider on that narrow bend. The whine comes and goes through the trees, getting louder as it makes a statement past our dar, then grinds its way onwards and disappears. Listening closely, minutes later, you'll still hear him higher up. Basic senses seem sharper when we're not overloaded.
A few clenches squeeze the chill from my fingers to write. An early delivery is on a bicycle down the hill, jammed in the basket. Work gives purpose. His chain grips, countered by thinning brakes on grating rims. Smoke from the bakery promises sponge bread and a blister pack of hard butter.
Then two rounds of coffee and a walk past the almond butter shop. The mill hasn't stopped, churning round at the same speed as yesterday. It'll soon be time for prayers again.
Deon
Twitter: deon_bing
#Morocco #Imlil
Posted by Deon Bing at Monday, December 14, 2015 No comments:
Email ThisBlogThis!Share to TwitterShare to FacebookShare to Pinterest 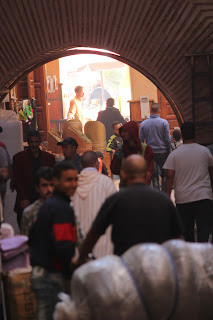 Gare routiere de Voyageurs Agadir - thats what the sign says. It means nothing to me, other than it must be where the Supratours bus will arrive in Agadir, because there are lots of other buses and people and baggage. And smoking men drinking single espresso and a side water watching soccer on big screens around cocktail tables. We point to order the same, trying to look similarly passionate about the correct team.  We fit in perfectly, other than our boardshorts and slops amongst high shine shoes and dark leather  - and the language and team. The Casablanca bus arrives and good fortune rather than planning ensures the correct family meet each other at the right time, half way around the world away from home.
Bags and surfboards of all sizes pile up on the pavement but we still need to get through the terminus to find our car and load it. Someone grabs the tail of the board bag and offers to help. I've been in this situation before - no one offers for free, I'm on a budget but he won't let go. So I negotiate. 5 dirham maximum before we go any further. A wave away, 'no money - I will help carry'...sure...I am clear that five is the most I will pay, preferring to die under the load than part with holiday cash. So we start our grumbling train of luggage into the busy Gare whatsisname. Through the manic terminus, past bumping crowds. I stop regularly to confirm no additional charge for stairs. ' No money - I help your family' - sure buddy, it must be at least double by now. Ten dirham max - they have a way of pushing you. I've been here before. Finally through the exit, past taxi touts and hash offers, its another half kilometer to the car. He's hanging on. That anyone would carry a pile of longboards for 5 dirham eludes me, but I won't be budged on sympathy.
Finally at my beaten rental, we relieve the cramp and lower the boards, exhausted. My coin is ready, on its own in my right pocket - never show them you have more. 'No problem my friend, I like to help your family, they look tired'. I'm stunned. He presses his key remote and one of the finer German offroad vehicles flashes back. I notice his high shine shoes. ' Enjoy Morocco!' he says in parting, smiling at the five dirham in my hand.
Deon
Twitter: deon_bing

Posted by Deon Bing at Monday, December 07, 2015 No comments:
Email ThisBlogThis!Share to TwitterShare to FacebookShare to Pinterest 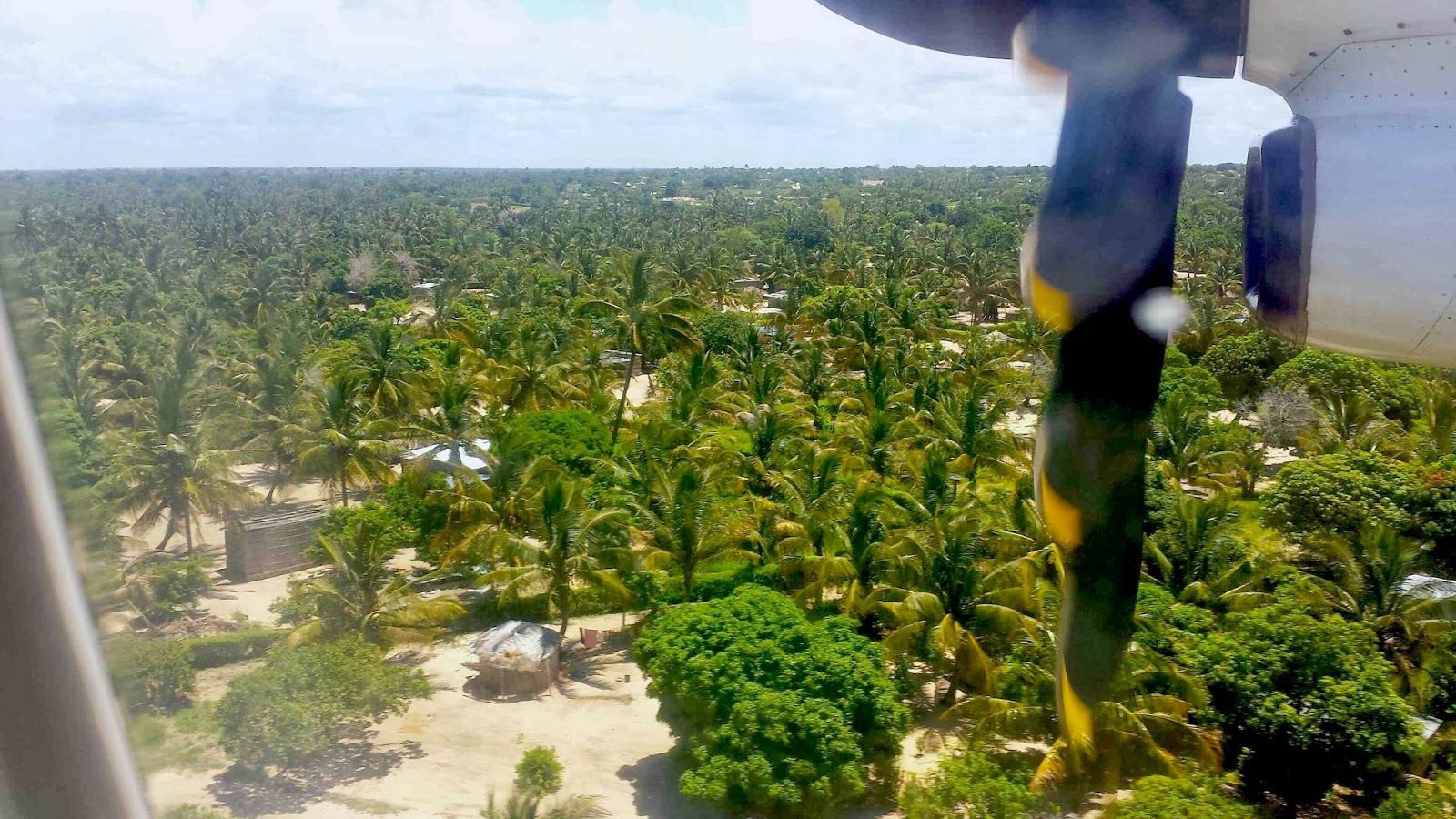 I'm sweltering in a cigar tube parked on a remote runway in a tropical country. Machete props like two smashed starlings are inches away from the window, threatening to cut us in half. The only safety briefing I've ever wanted to listen to is in a language I don't understand. We're a tense but obedient lot, deserving of life and landing based on the exorbitant fee to be sitting here in the first place.
A lurch to the left and a shadow grows as our pilot pulls himself up the creaking stairs to the door. It becomes obvious that the reason we're all halfway back is to compensate for his impressive bulk. A hulking fist of a man, with a coked up swagger, he faces us through bling Aviators without acknowledgement. The look of a man happier to be on a bombing mission than a flying creche. A man who likes his patties fatty and his hostesses lean. The cabin door ricochets off his shoulder, smashing into something important. People his size should be butchering buffalo, not tweaking sensitive equipment. But, like buffalo, nothing holds fear for our pilot. No sky, no ground, nor the transition between the two. Within seconds he's beaten the props to life, sucked bucket loads of jet fuel down the pipes and faced us into the hot breeze. Our brutal, fearless, flying man thrusts us over the goats at the end of the runway and punctures the sky with force. He takes us up, he counter punches storm clouds and he smacks us down an hour later. No calming music, no piped niceties, just a guy who grabs a plane by the balls and shows it who's boss.
Deon
Posted by Deon Bing at Sunday, February 16, 2014 No comments:
Email ThisBlogThis!Share to TwitterShare to FacebookShare to Pinterest

So last night I was compressed in the golden circle with old hairy okes in leather while Glenn screamed and jammed and Slash slashed and it was just all rock n roll and stuff with the Kings of Chaos. Def Leppards and Blind Elephants and a veritable challenged herd of the Big Five. And it was crazy, and my tympanae rang mutely as I crawled back home at some time this morning. Oh please, begging for one last riff,  I searched for another hit of 'Burn' on Youtube... this is what I found. While Glenn was probably clean by the time he jammed with 'Kiss and the Power Rangers' he probably felt the Sake was a little strong that night...
Rock On!!
Deon
Posted by Deon Bing at Saturday, June 08, 2013 No comments:
Email ThisBlogThis!Share to TwitterShare to FacebookShare to Pinterest 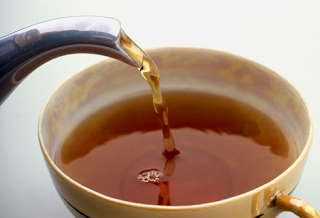 "Come, lets brew up a nice pot of tea". It used to be simple. Pungent, woody tea leaves covered the bottom of that teapot you always burned your knuckles on, boiling water stirred in and left to simmer. A minute pause and you'd pour into thin china cups through a strainer, dark and strong.
Now, when the call is for "A cup of tea, please" - you need a T.LLB degree.
If you thought you had it nailed with Earl Grey, you're not even close.
The offer begins with a variety of infusions, with ginger and lemon, mango and acai, Herbal teas, chai, green Rooibos with added star anise, maybe a little apple and cinnamon, a squeeze of lemon and a whirl of hibiscus, rosehip with a crush of rhododendron, peppermint tea and new chrysanthemum blossom with a pinch of bergamot oil. A tea for all seasons, antioxidants to promote wisdom, health and happiness.
I'm so spun out with choices...I'll go for the coffee!
Certainly sir, percolated or french press, Costa Rican or Brazilian, cup or mug...
What about a glass of water...well there's tap, spring, still, added minerals, flavoured...
Jeez! What does it take to get a drink around here?
Deon
www.deonbing.co.za
Twitter: deon_bing

Posted by Deon Bing at Thursday, June 06, 2013 No comments:
Email ThisBlogThis!Share to TwitterShare to FacebookShare to Pinterest 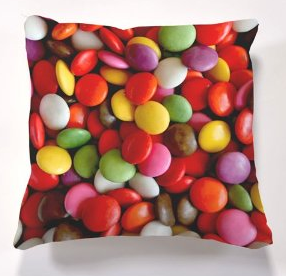 The showgirl music rises and that spiral graphic with the top hat swirls onto screen - yes, you poor bastard, this could have been your life! Somebodys' billion dollar mansion is Top Billings latest square abode with wrap around views and a water feature. The stairs are somehow suspended above a terracotta warrior and the catering wing has no dishes on the runway marble counter. Two beaming, well groomed children have additional creative space to pursue their entrepreneurial venture, ensuring a Forbes listing before they're five.
We're introduced to the myriad designers that conceptualised the space, with manicured facial hair matching their topiary installation.
You shift uncomfortably on your 30 year old Gomma Gomma, your TV lounge cum home office, sports bar, admin ironing room bathed in a blue glow. You consider how many arms deals must be pulled off to live like that. But at least you gain a free insight into current colour and design trends.
Which starts and ends with a scatter cushion that no one else notices...
Deon
Twitter: deon_bing
www.bingdigital.co.za

Posted by Deon Bing at Wednesday, May 22, 2013 No comments:
Email ThisBlogThis!Share to TwitterShare to FacebookShare to Pinterest
Older Posts Home
Subscribe to: Posts (Atom)